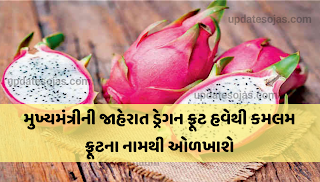 The lotus-like dragon fruit will now be known as Kamalam, as it was the state government that proposed to Indian Agriculture Research to name the dragon fruit Kamalam. Chief Minister Vijay Rupani has also confirmed this and announced that this lotus shaped fruit will be named after the Sanskrit word Kamalam.

Indian Agriculture Research has been approved for the name Kamalam. Now Dragon Fruit will be known as Kamalam in Gujarat. The state government will also apply for the lotus fruit pattern in the coming days.

Dragon fruit will now be known as Kamalam fruit in Gujarat. Not only has the name been given by the government itself, the government has also proposed for the recognition of the new name. So that in the future Dragon Fruit may get the official lotus name. You may have seen the names of cities and streets change, but now the name of Dragon Fruit has also changed.

Known as the Dragon Fruit, this fruit is named after the farmers of Kutch as it looks like a lotus. But now the government has also given the name Kamalam to this fruit and has also proposed to accept it. This fruit is being cultivated in large scale in Gujarat including Kutch. But the government believes that its dragon fruit name does not fit. Therefore, from now on, Chief Minister Rupani has announced to name this fruit as Kamalam or Kamalam Fruit.