Here Are 4 Things To Remember While Charging Your Mobile 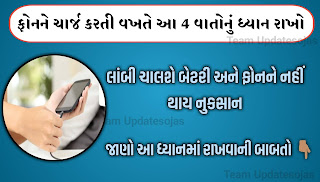 During the festive season, the new smartphone has taken a hit in the market. When we go to pick up the phone, we ask how much mAh is its battery. Phone battery is very important. So today we will tell you what to keep in mind while charging the bat.

Do not stop charging overnight

Many people have a habit of dropping the phone while charging. But doing so overcharges the battery and also affects the performance of the phone.

Use only original charger

Each company makes a special charger for the phone. Sometimes people use any charger instead of charging in the phone’s original charger. Doing so damages both the battery and the phone.

Remove the cover and charge the phone

People also wear a strong cover to protect the phone. Therefore, charging the phone with a cover can cause the battery to overheat and the battery may burst if the charging is not stopped. So remove the cover and charge the phone.

Do not use the phone while charging power bank

Sometimes people charge the phone from the power bank and meanwhile use the phone. But by doing so, the performance of the phone’s battery performance deteriorates completely. So that such a mistake is not made