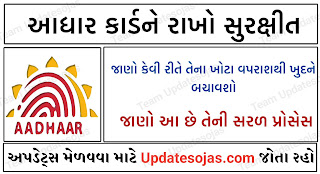 The Aadhaar card contains the biometric and demographic information of a user.  The need for support can be utilized only by taking advantage of all government schemes ranging from the admission of a child to school.  Users are often concerned about the security of the Aadhaar card, which will be released by the Unique Identification Authority of India.  There are many such cases in which Aadhaar card has been misused.

Can protect the base

Users are often concerned about the security of the Aadhaar card, which will be released by the Unique Identification Authority of India.  There are many cases in which the Aadhaar card has been misused.  If you are also concerned about the security of the base, there are some features of UIDAI that can alleviate this concern and protect your base.  In doing so, your support will not be misused even if you fall into the wrong hands.

Can be easily downloaded

UIDAI offers Masked Aadhaar cards as a safe option for the people.  This is a kind of electronic (soft copy) Aadhaar card.  Which can be easily downloaded.  The Aadhaar card also gives users a unique 12-digit number.  Users are also worried about this number.  In it you can use masked support.  Apart from that you can also lock your base.  You can lock your Aadhaar number with just one SMS.

This is the process