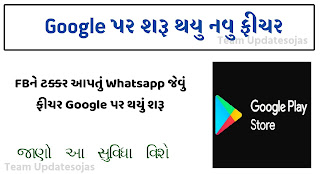 The search engine company Google is also gearing up to compete with the social messaging apps FB and Whatsapp platforms.  Yes, Google has started launching innovative products in this regard.  The company has launched a new chat feature in its messaging service.  The company based this service on the criteria of open rich communication services.

There was talk of working on a new feature on the Google Play Store that would allow users to compare multiple similar mobile apps and decide to download and use them based on it.

Consumers are bound to benefit from these competitive products.

Comparisons can be made with the app
While looking at the VLC Media Player app, you can see MX Player, GOM Player and many more apps in the Compare Apps section.  In addition to comparing apps between the series, you’ll find features like ratings, number of downloads so far, ease of use.

People will get more options

Google’s service is similar to Facebook Messenger, Whatsapp and Telegram.  The company said it has launched its own chat feature for all on Android to modernize the messaging experience.  Now anyone using messaging in the world can use this modern chat feature with their own carrier or directly with Google.