Office working time will be 12 hours 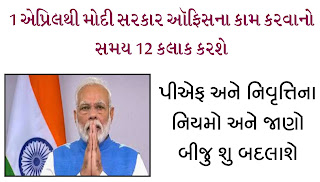 The new draft law proposes to expand the greatest working hours to 12. The draft rules of the OH Code also provide for an additional 15 to 30 minutes of overtime by calculating 30 minutes. Under the current rule, less than 30 minutes is not considered eligible for overtime. The rules of this draft would prohibit any employee from working continuously for more than 5 hours. The draft rules also include instructions to give employees half an hour of rest every five hours.

From April 1, 2021, gratuity, PF and working hours may change drastically. Employees will receive an increase in gratuity and provident fund. And then the salary in hand will go down.

The monetary records of the organizations will likewise be influenced. And the reason for this is the three wage code bills passed in Parliament last year. The bill is expected to take effect on April 1 this year.

Under the new definition of wages, allowances will be a maximum of 50 per cent of the total salary. This means that the basic salary for the month of April should be 50 percent or more. Significantly, this is the first time in the country’s 73-year history that labor laws have been changed in this way.  The government claims that it will be beneficial for both the employer and the workers.