The Modi Government Will Make This Special Change In PF 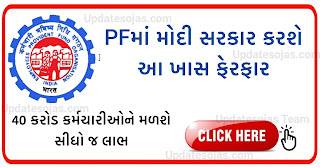 The Employees Provident Fund Organization (EPFO) may make its ways for 400 million sloppy area workers the nation over. However, the EPFO has undergone major changes in the way it works.

In the new year, the organization will have to make a concerted effort to improve services, focusing on implementing the government’s ambitious Self-Reliant India Employment Scheme (ABRY). The Social Security Code is expected to take effect on April 1 next year. EPFO will have to adapt its plans and services to the new environment as this will bring workers in the unorganized sector under the purview of social security.

There are more than 400 million unorganized sector employees in the country who do not appear in the pay register of any establishment or company. And do not receive benefits such as provident fund and graduation. The government plans to bring all these under EPFO to provide social security.

The area of the network has to be increased

The emphasis will be on a self-reliant India plan

Labor Secretary Apoorva Chandra said that in 2021, the main focus of the EPFO will be on the Self-Employed India Employment Scheme (ABRI) under which new appointments will be encouraged. Other efforts are also underway for the delivery of services, Chandra said. But the main focus will be on job creation under ABRI. Earlier this month, the central government approved the ABRI. The objective of the scheme is to promote employment in the formal sector under the Self-Reliant India Package 3.0. Under the scheme, Rs 22,810 crore will be released between 2020 and 2023. For new employees coming to work under the ABRI scheme from 1 October 2020 to 3 June 2021, the government will pay a 12% contribution from both their employees and employers to the provident fund. This total amount of 24% will be deposited by the government in the Employees Provident Fund for two years. The scheme will be implemented in establishments employing one thousand people. Institutions with more than 1000 employees. In his case, the government will deposit only 12% of the employee in the Employees Provident Fund. EPFO will develop a software to implement this scheme so that there is no disturbance in the benefits to be met.

Earlier this month, Labor Minister Santosh Gawar said that an amount of Rs 13,300 crore had been declared under the Covid-19 relief scheme for 52 lakh employees under the EPFO. This amount given from the provident fund does not have to be returned. People were allowed to withdraw money from the EPFO to make a living due to the spread of the Corona virus epidemic and the closure of factories during the lockdown. EPFO has decided to pay 8.5% interest on provident fund for the year 2019-20.